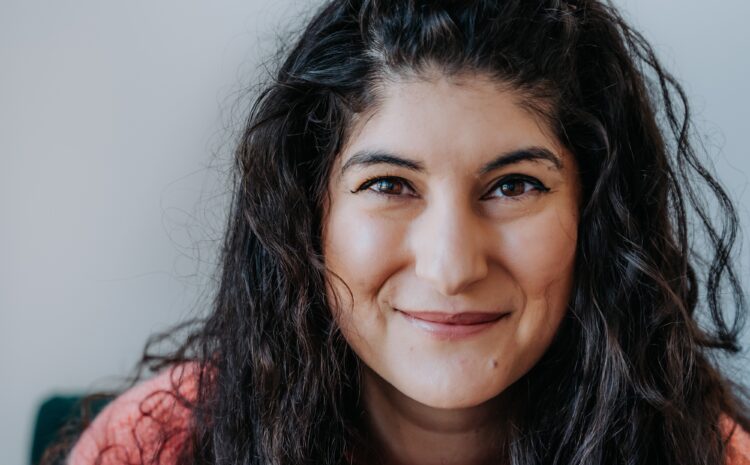 Nadine Aisha Jassat is a writer and poet.

In 2018, she received the Scottish Book Trust New Writers’ Award and was shortlisted for the Edwin Morgan Poetry Award. In 2019, Scottish Makar (poet laureate) Jackie Kay listed her as one of the UK’s 10 Compelling BAME (Black, Asian and minority ethnic) writers in her International Literature Showcase selection.

Jassat is also a professional working in the field of gender-based violence, delivering workshops and training youth work staff. The DVD adaptation of a piece of theatre she created with young people is used by Rape Crisis workers in schools and youth groups in Scotland.

Jassat’s poetry deals with family, resilience, gender issues and racism. In Third Generation (after Cross by Langston Hughes), she writes about her mixed heritage: her father is “a brown old man” and her mother is white. Society’s attitude to her father is unforgiving: he wants a suburban house so he can fit in, but “if my Ma ever left that house / you’d condemn him for that too”. But to Jassat, each of her heritage is precious:

“When they say she’s not my Mother,
I say to me we look the same,
and when they tell me to be ashamed of them,
I say I have two worlds to gain.”

Mother-daughter relationships are never straightforward. In Inheritance, Jassat writes about how anxiety links her to her mother, the things that her mother needs to say and does not. The poem is structured with repeating lines that reflect the way we worry at something over and over.

“Anxiety. 4 syllables given to this ceaseless, connecting string.
This genetic-chemical-taught-inherited
threaded parallel between
My mother and me.”

Gender equality is something that Jassat has worked on, and in Coin Toss—a response to a one-penny coin branded with Votes for Women—she looks at how things have changed (or not) for women over a century. Her poem reflects the two sides of the coin: Heads is dated 12th November 1910, and is about women deciding to stand up for their rights. The flipside, Tails, is dated 6 February 2018: women are still fighting for their rights. A lot has been won, but there is still much to do.

“When you tell me we’ve won equality,
I’ll tell you at least two of my sisters are murdered a week
by men. We’re at a coin toss in history,
spinning in the air between how far we’ve come,
and where we need to be.”

Jassat’s poetry is powerful and unafraid to take on big issues.